The Space Place is a 2008 direct-to-DVD children's animated television series produced by Catalyst Pictures Limited to help Autistic children understand and recognise emotions. It was a direct follow-up to The Transporters, which was made by the same studio for the same purpose. The Space Place reused the Transporters' concept of putting human faces on vehicles, but the creators chose to use animated faces instead of live-action ones. Both shows can be seen as drawing considerable inspiration from the Thomas & Friends, which was already popular among the Autistic community due to featuring anthropomorphic vehicles in the lead role voiced by one narrator until the twelfth series.

The show stars eight model space vehicles, with a wide range of cultural backgrounds and ages. They live in a museum called The Space Place. Every day when the museum closes and the people all go home, these vehicles begin their adventures. 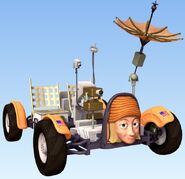 A teenage Canadian moon buggy. She is impetuous, daring and loves driving in and out of the craters on the moon display. Despite being Canadian, she has an American flag painted on each of her two front wheel arches.

A teenage Indian rover. He enjoys collecting rocks and is proud of his collection.

A Chinese tourist spaceship in his twenties. He is trendy and likes to have all the latest gadgets. His cap displays the Chinese character '龍', which can be pronounced 'lóng' and translated to 'dragon'. 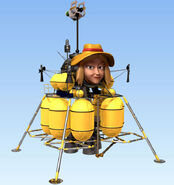 An Australian lunar lander in her twenties. She is cheery, outgoing and loves to fix things with her mechanical arm.

An American space shuttle in his thirties. He is straightforward, sensible and reliable.

A French satellite in his thirties. He is well-meaning but can care about his appearance a little too much.

A Russian sputnik in his fifties. The others don't always include him in their adventures, but he has a heart of gold. 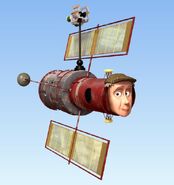 A British space telescope in his sixties. The others look up to him for the experience and knowledge he has gained in his time.